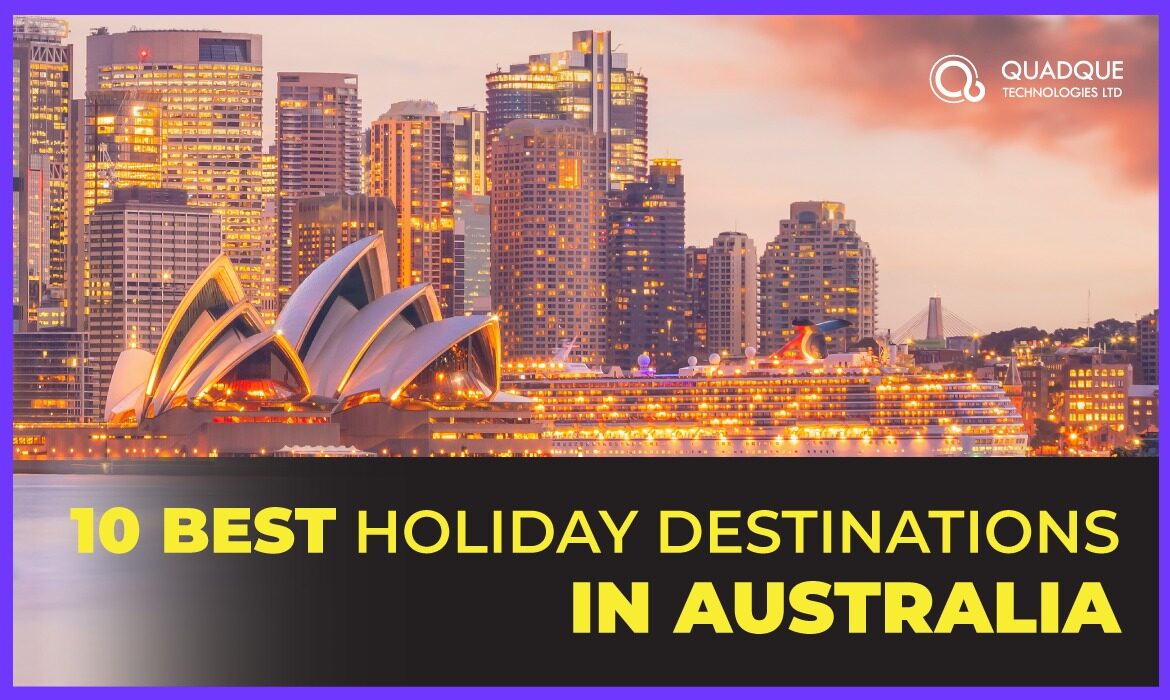 Australia is a place of opportunities. To begin with, there are Aboriginal traditions of powerful spirits who conjured up the red desert of Australia and coral reefs, as well as armchair travelers who identify Australia as their ideal vacation location. The Land Down Under merits all the hype. Kangaroo Island’s remoteness, the Daintree’s deep rainforest, Margaret River’s vineyards, and the Gold Coast’s beaches are among Australia’s most popular tourist destinations. In this article, we explore the top 10 best places in Australia where you can spend your holiday. The Sydney Harbour is a stunning welcome mat for the majority of international tourists that enter Australia through Australia’s largest metropolis. The Harbour Bridge and the Opera House are unmissable Sydney monuments, but Bondi, Coogee, and Manly Beaches in the Eastern Suburbs and Northern Beaches are without a doubt the Harbour City’s most alluring attractions. This sparkling seaside resort on the coast of Queensland is renowned for its surf beaches, shopping, lively nightlife, and family-friendly activities and attractions. Take a journey to the surrounding hinterland for an altogether new change of scenery, or pack the family into the famous theme parks with enormous thrill coasters, animal shows, and lots of activities for the little ones as well. Melbourne, the second-largest city in Australia, lacks Sydney’s sand and sunlight but makes up for it with its coffee, culture, food, and sports. The capital of Victoria is the most cosmopolitan city in Australia, comprised of gloomy laneways lined with urban art and hole-in-the-wall cafés, arty shops and galleries, progressive eating, and sport. An abundance of sports. Brisbane, the cultural center of Queensland, is the third-largest city in Australia and gives the rare opportunity to simultaneously view the past and the future. For a dose of culture, explore the Old Commissariat Store and Windmill, both of which were constructed by convicts, as well as the new Gallery of Modern Art. Admire the view from the summit of Mount Coot-tha, cruise the famous Brisbane River, and snuggle adorable, cuddly creatures at the Lone Pine Koala Sanctuary. The most eastern point of mainland Australia is many things, including one of the most popular tourist sites in the country. If you want to avoid the crowds and expense of Byron Bay, you may retreat into the unspoiled hinterland, relax in the alternative lifestyle center of Nimbin, or catch a wave in Yamba, which is just down the road.

The reputation of Australia’s capital is negative, mostly because it is overrun with politicians. The Australian War Memorial, the contemporary National Arboretum, the multitude of museums including Questacon and the National Gallery, and an interesting (and burgeoning) food and drink scene are just a few of the attractions that are sometimes ignored by tourists in this little city. Adelaide, the capital of South Australia and the center of the global opal industry, is an exquisite city. While you are here, be sure to pick up one of the beautiful stones from the South Australian mines. Adelaide is a treasure trove of fine arts, shopping, and gastronomy, as well as a haven for nature enthusiasts, with wonderful climbs up the Mt. Lofty Ranges and breathtaking surf off the Fleurieu Peninsula. Nevertheless, probably the most popular activity in Adelaide is visiting the vineyards of the renowned Barossa Valley, where you may purchase a bottle of wonderful wine to take home. Noosa is renowned as a surfing destination in addition to being renowned for its vibrant bays and immaculate stretches of coastline. The tranquil yet fashionable coastal community is ideal for lounging on its golden dunes, window-shopping along the main street, and enjoying leisurely meals. However, if you are interested in experiencing the vast outdoors, Noosa National Park provides some excellent walks. You may also kayak on the open ocean, canoe through the Noosa River Everglades, or take a day excursion to the sand dunes and rainforest of Fraser Island, which are classified as World Heritage sites. An island paradise with more than 60 white sand beaches, blue sea, and an abundance of marine life located within a half-hour ferry ride from Perth would be a popular vacation even without Australia’s prettiest mammal. Quokkas, which resemble little kangaroos and aren’t scared to approach tourists for selfies, are Rotto’s main attraction. Observe it while you can. The world’s biggest coral reef system, which extends 2,300 kilometers along the hot Queensland coast, is losing its color due to climate change, but there are still plenty of diving locations where you can snorkel to view colorful coral and incredible marine life. In sunny North Queensland, you may also visit the lush Daintree Rainforest, the spectacular Fraser Island, and the tranquil Whitsunday Islands.

Australia is a paradise for those who want adventure. Whether you want to explore Australia’s outback wilderness, surf along its tremendously different beaches, swim the Great Barrier Reef, cruise in the Whitsundays, or try something else, you will be spoiled for choice in this adrenaline-pumping paradise. Australia is proud to have some of the world’s finest beaches. From this blog, any tourist can learn about the best 10 places where you can visit in Australia.