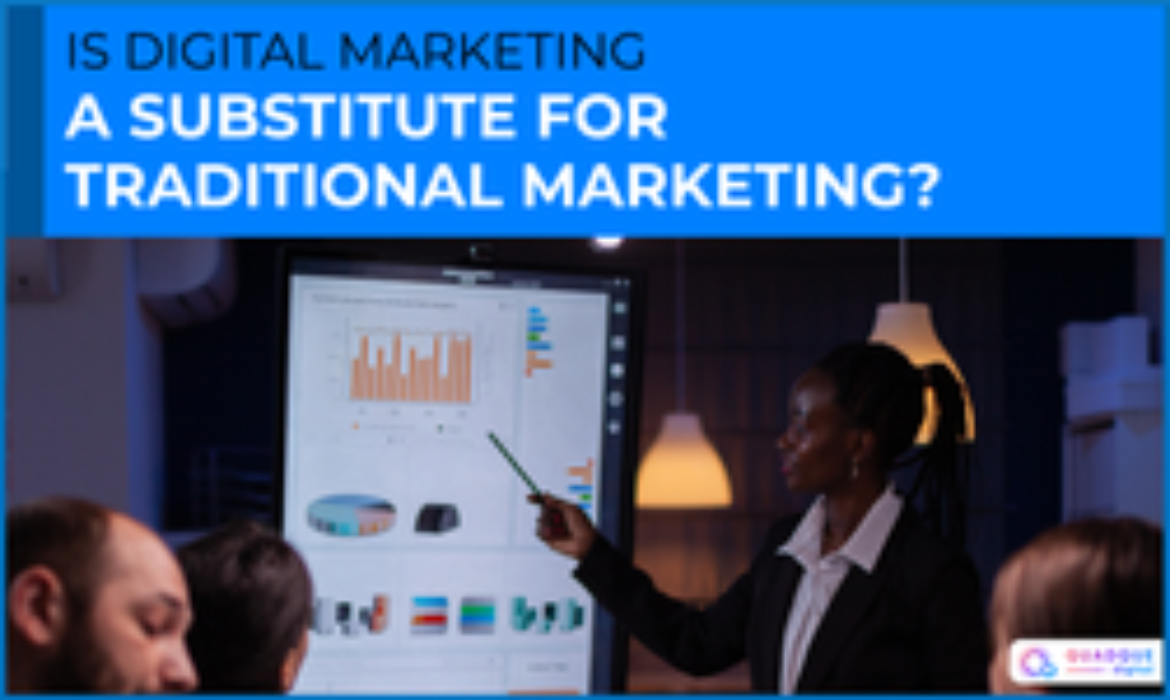 What exactly is digital marketing? Digital marketing is concerned with the introduction of the internet and a company’s presence on it. It incorporates some of the following marketing strategies:

Basically, digital marketing involves a plethora of various approaches to meeting people where they spend the majority of their time- the internet! It involves activities like as optimizing a website and all of its content to appear better in search engine results, targeting people on social media with promoted and sponsored content, and placing advertising on big websites such as Google or Facebook. Email marketing efforts are also quite popular!

Digital marketing satisfies the four P’s of marketing strategy: product, pricing, location, and promotion, all through a user’s everyday connection with the internet. While conventional marketing meets clients where they are in terms of the physical location: at home, on the phone, on the road, or in the doctor’s office, digital marketing takes measures to get to where customers are online.

As individuals spend more time online than in the real world, digital marketing has fast become the most popular and successful type of promotion for most firms. Many businesses have switched their services to the internet arena, from making a legal will online to substance addiction rehabilitation online.

Digital marketing allows you to reach a broader audience more quickly and easily, as well as better target the people you want to promote to. Digital marketing is by far the fastest expanding field of marketing and is critical for both large and small organizations.

What exactly is traditional marketing? Traditional marketing includes a variety of methods. Prior to the development and emergence of the internet, all of these channels effectively existed and were the preferred means for corporations to hit their target markets and for those target audiences to be exposed to advertising.

Traditional marketing may be divided into five categories

Product placement and advertisement in magazines, newspapers, and other printed periodicals. Magazines and newspapers, according to the American Magazine Association, have the greatest ROI of 125 percent when compared to other conventional mediums.

Radio ads, podcasts, and television commercials are all examples of spoken advertisements. When streaming services initially appeared on the scene, many industry professionals were concerned that they would render broadcast marketing worthless. IBISWorld Reports claims that broadcasters have successfully adapted to the digital era, as seen by the 3.6% growth in industry revenues over the previous five years.

Snail mail is extremely successful in communities and for reaching target audiences that are used to receiving direct print marketing. This marketing channel makes sense if your target client is older and does not spend as much time on the internet as younger generations. In fact, Alliance Business Services discovered that this method of marketing was seen as the most reliable by 56% of consumers when compared to other channels.

Telemarketing through phone calls or messaging is included. Statistics show that telemarketing calls are the least popular form of advertising. Nearly 18,000 complaints against telemarketers are sent to the Federal Trade Commission in a single year. According to Private Citizen, telemarketers make over 148 million garbage calls every day. It’s also risky: the National Scam Information Center estimates that Americans lose $40 billion each year due to fraud calls, reducing confidence and reception for the sector as a whole.

This sort of advertising often comprises billboards, posters, and pamphlets. The outdoor advertising sector is one of the oldest kinds of conventional marketing and remains one of the most efficient. It’s because commuting produces captive audiences all around the world who spend hours stuck in traffic or just on the road for various reasons. According to Fit Small Shop, 7 out of 10 consumers make purchasing decisions while driving, and 30% of drivers visited a business after seeing a billboard. While conventional marketing is certainly no longer as relevant as it once was, it may still be useful in some areas. Traditional types of advertising are still utilized by many businesses, depending on their budget, location, and market goals. In reality, because of the amount of time people spend in their cars, billboard advertising is still quite successful.

For example, the average American spends 17,600 minutes each year in their automobile (according to a study from Arbitron). That’s a total of 293 hours. Outdoor advertising will always have a role in the world as long as we spend time outside. This conventional type of advertising has also begun to merge with the virtual environment, resulting in a hybrid kind of marketing.

Digital billboards, for example, use digital marketing technologies to express many distinct messages and target specific audiences, yet also use traditional outdoor media placements and locations. Additionally, the average annual mileage for adults is 13,506, making them a captive driving audience for thousands of miles and hundreds of hours each year.

There are still active kinds of conventional marketing, such as radio marketing, and a considerable segment of the public still trusts traditional advertisements. That is how they were raised and how they are most accustomed to living. Even while conventional marketing is not expanding as rapidly as digital in the near future, it still has a place for some firms and in some locations.

It is hard to tell what the future may bring hundreds of years from now, however. It may not be the first place a company looks to promote its brand, but it can be beneficial, particularly when combined with digital marketing efforts.

To summarize, digital marketing will not completely replace conventional marketing, but it has clearly captured a significant share of the market.